Page-Pryde PropertiesUncategorizedAnd the 2017 Color of the Year Is – Poised Taupe!
16 Sep
Sandra Morgan
no comment 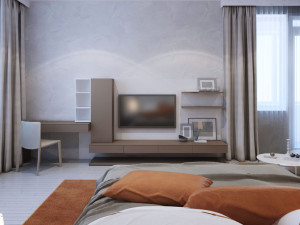 The Sherwin-Williams Color of the Year informs interior décor decisions for designers and homeowners, echoed in seasonal trends throughout the year. In 2017, that color will be Poised Taupe, an understated, “modern take on a timeless classic” blending the best of browns and grays.

“Poised Taupe celebrates everything people love about cool gray as a neutral, and also brings in the warmth of brown, taking a color to an entirely new level,” explains Sue Wadden, director of Color Marketing for Sherwin-Williams, of the choice. “Not cool or warm, nor gray or brown, Poised Taupe is a weathered, woodsy neutral bringing a sense of coziness and harmony that people are seeking.”

According to Wadden, Poised Taupe signals a new direction in neutrals, which have historically been either cool or warm. Two in five surveyed by Sherwin-Williams identified taupe as a “timeless neutral,” neither too cool nor too warm.

Poised Taupe is drawn from Sherwin’s “Noir” palette, and pairs with a range of colors, including aureolin yellow, lava red, pomp-and-power purple, and teal.

“Consumers yearn for spaces that feel welcoming and hug them as they enter,” Wadden says. “Earthen brown combined with conservative gray, creating Poised Taupe, embodies all of these emotions.”